RICHARD DEROSSET
Richard W. DeRosset was born April, 1953 in Boston,  Massachusetts. At the age of nine, his family moved to La Jolla, California. Richard’s mother was an artist for the Walt Disney Company; so it is understandable where his artist skills originated. He did not, however, begin painting until 1977.

After high school graduation in 1972, Richard joined the United States Navy. He served on two ships; USS EPPERSON (DD-713) and USS PAUL REVERE (APA-248) between 1972 to 1976. Following his service in the US Navy, Richard remained at sea on a commercial fishing vessel. He was very fortunate to survive that ship’s sinking in 1977. Richard had spent several hours in the ocean before being rescued by the U.S. Coast Guard. A feature cover story of this event was published in the “San Diego Weekly Reader” newspaper. A great read! In less than two years, Richard became qualified to be a Ship’s Captain and Master Maritime credential status. DeRosset took command of the tanker “Pacific Trojan” home-ported in Long Beach, California. He has always had a deep love for the sea, ships, aircraft and his uncanny ability to exhibit them as an artist. DeRosset believes it is the instinctive, innate “feel” an artist has for the subject that is the key to success.

Towards this goal, Richard devotes as much time to researching a particular subject or historical event as he does to painting it. His artwork is displayed on canvas, paper, fabric and murals throughout the world including,  the United States, the United Kingdom, France, Mexico, the Vatican, Republic of Malta, Russia to name a few. In the United States, Richard’s artwork is showcased in a host of museums. Museums include: The Smithsonian Institution; The President George Bush Memorial Gallery; The Port Columbus Civil War Naval Museum in Columbus Georgia; Patriot’s Museum in Ohio; Naval War College and nationally acclaimed Maritime and Aerospace Museums in San Diego, California. Additionally, his talent has been commissioned by writers to provide pieces of art for bookcovers and specific page inserts. Also, Richard is the nautical historian character, St. Julien Perlmutter, in the novels of best-selling novelist Clive Cussler. Richard contributes to maritime history books and technical manuals.

Richard’s major ongoing art project is contributing to the restoration and beautification of the San Diego’s Veteran Museum. In this museum, he has painted seven wall murals (which took 5 years) and donated a fine collection of individual paintings to the museum. He has been selected as the official artist of numerous associations, galleries and museums nationally and internationally.  Richard DeRosset has become one of the most sought after marine artists in the nation. Richard maintains his extensive library and art studio in San Diego, California. 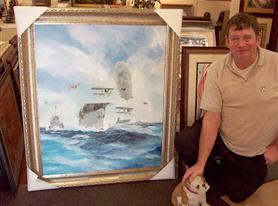 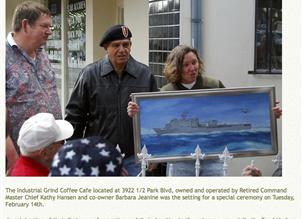